The menu bar has always been a kind of "holy grail" of user interface elements for me. It contains all application commands and allows the user to discover the application capabilies and to learn the keyboard shortcuts. Often used commands are placed into the toolbar for faster access.

I did no scientific research about this, but I think first it was Microsoft with Windows Vista which started to put the menu bar into question for some applications:

Until I tried those applications I've been a strong opponent of those "menu bar violations". But after working a while with both approaches it seems that ribbons work very well for applications with a huge number of commands. I'm not sure whether the Internet Explorer or Google Chrome has been the first browser without menu bar, but as user of Chrome since around two years I was surprised that I never missed the menu bar and liked the well-arranged menu button.

I got the impression that the menu button as replacement works well for applications with quite less commands. In the meantime even Firefox 4 has switched to a default setup where no menu bar is shown; so I asked myself whether this might be an option for Dolphin and simply gave it a try. Since the release of Dolphin with 4.5 I try to strive for a cleaner and less cluttered default setup and now with having no menu bar I think the default setup is quite OK [1]: 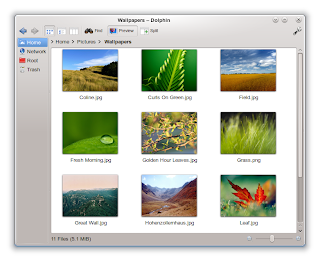 It gets move obvious when comparing this with the default setup in 4.5: 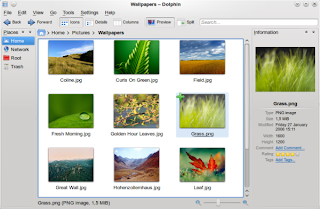 Before the complaints "I want my menu bar back" start: Of course it is possible to enable the traditional menu bar :-)

Back to the new default setup of Dolphin. Beside the missing menu bar a lot of smaller updates have been done too:

Please note that those points just talk about default settings, no functionality has been taken away. For me it was - and still is - one of the main goals of Dolphin that it is easy and efficient to use without cutting too many features. I somehow like it that despite the added functionality during the last years this is not reflected in additional visual clutter. When looking back at the history of Dolphin screenshots it is somehow funny that for the upcoming 4.7 release Dolphin looks more similar to the old KDE 3 version than the 4.5 version :-)

[1] Please ignore the current look of the zoom-icons in the bottom-right of the screenshot. They will be replaced by a more decent version created by Nuno before 4.7.
Posted by Unknown at 8:56 PM 82 comments: 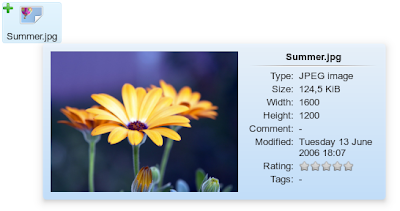 History
When Dolphin has been written for KDE SC 3 this was straight forward: The class KFileMetaInfo has been used and the metadata was read in the context of the application within a short period of time. The fast retrieving was possible by using the hint KFileMetaInfo::Fastest that assured only up to 64 KByte of the file are read. This limit was sufficient for getting the most important metadata.
With the transition to KDE SC 4.0 KFileMetaInfo internally has been rewritten to use Strigi for getting the metadata. Like Dolphin and other components in KDE SC 4.0 also KFileMetaInfo and some metadata analyzers of Strigi had rough edges:
Current State
The following things work now in KDE SC 4.6:
Still open:
From a users point of view it is not important whether Dolphin crashes because of an analyzer or because of an issue in the Dolphin code. Although most of the analyzers are very stable in the meantime it is still a pain for users that e.g. have some Powerpoint-files where the corresponding analyzer simply cannot scope with the 64 KByte limit.
KDE SC 4.7
I understand that writing metadata analyzers can be very tricky, but I was always convinced that not crashing when reading data is not difficult. But no matter whether I'm right or wrong with this assumption: Fact is that more than 3 years after the release of KDE SC 4.0 a few analyzers still crash and seem to be without maintainers that care about this.
Well, with KDE SC 4.7 those crashes will not result in crashing Dolphin anymore. I've moved the reading of the metadata into a custom process. If an analyzer crashes then the worst thing that happens is that no metadata is retrieved. The nice thing is that this also solves crashes for other components that read metadata: E.g. the fileproperties-dialog or overwrite-dialog of kdelibs. In retrospective I should have done this already a lot earlier, but the fact that the old approach worked so well in KDE SC 3 just made me resist to use a dedicated process for this. In the meantime I'm convinced that this approach is the right way in the longterm: It is simply risky if the stability of an application or some kdelibs-dialogs depend from external plugins where the quality of the code varies a lot.
So let's hope this is my last metadata-related post and that this topic is solved finally :-)
Update: Carsten Pfeiffer pointed out that in KDE 3 the KFileMetaInfo::Fastest hint did not restrict the parsing to 64 KByte. Instead it was up to the analyzers itself how they provide metadata that can be calculated cheaply. Too sad that most of the current Strigi analyzers don't support this.
Posted by Unknown at 3:18 PM 15 comments: