When introducing Dolphin 2.0 I talked about  grouping support for all view modes. But I could not offer any screenshots, as this feature was not ready yet at that time. So here we go showing the same folder grouped by the file type in the icons-mode (which is already available since Dolphin 1.2): 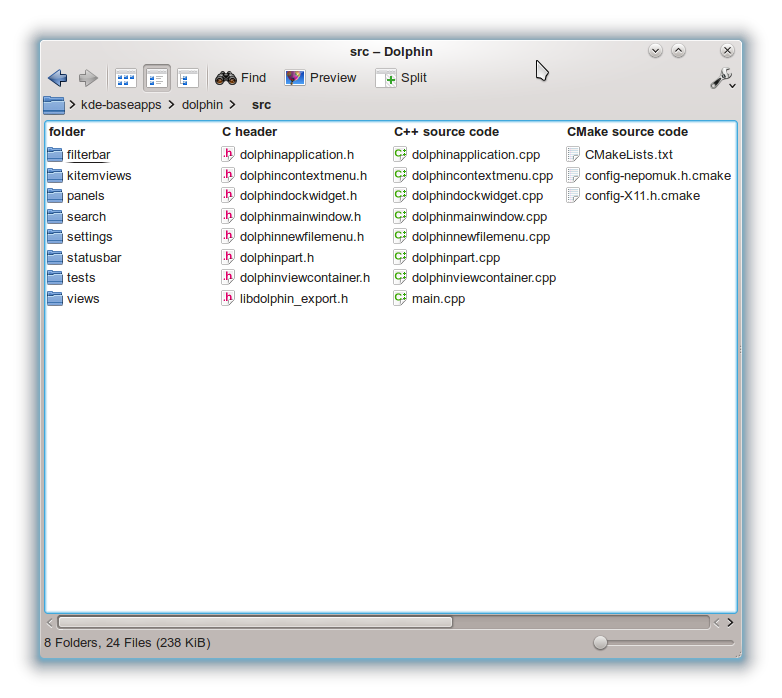 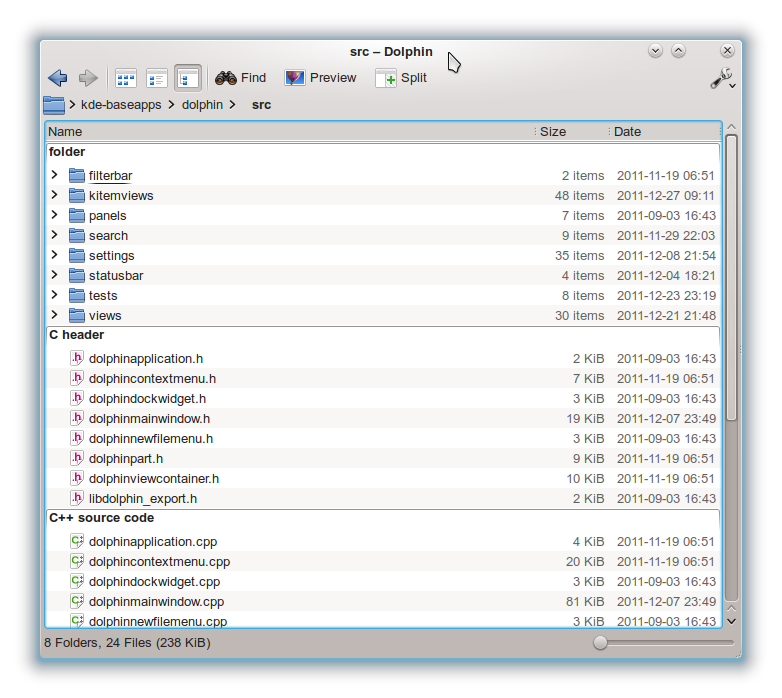 I think there is a lot of room for visual improvements of the group-headers especially in the combination with the details-mode. However this is something that needs to be discussed with our Oxygen-gurus Nuno and Hugo and will hopefully be improved in the next version.

Still I'm quite happy with the new implementation. It fixes performance issues that occured with the previous implementation, fixes keyboard-navigation issues and provides a solid base for future extensions like grouping by rating, tags, comments or any arbitrary grouping-category.

The rewrite of the Dolphin view-engine was a lot of work and resulted in changing of much code. The benefits are an improved performance, getting rid of a lot of bugs that could not be solved with the old view-engine and a better maintainable code-base. But it would be illusionary to expect that there will be only benefits and zero regressions: Dolphin 2.0 will be a typical "dot zero" release where minor issues will popup after the release. However based on the current feedback on bugs.kde.org there seem to be no showstopper bugs left. The currently known regressions and missing Dolphin 1.x features can be seen on the Dolphin 2.0 Status page and I'm confident that during the 4.8.x release cycle most regressions can be fixed.

As the development-focus will be to fix the regressions and making the fixes available for the 4.8.x cycles, there is not much room for big features in Dolphin 2.1. But there is one feature that I miss since Dolphin 1.0 and that could not be implemented with the old view-engine: The showing of any arbitrary meta-data of a file in the views. The tooltips and the information panel already can show things like rating, tags, album-name, image-size and a lot more: 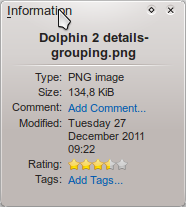 Now in Dolphin 2.1 it will be possible to show all this kind of meta-data as part of a file or directory in all view-modes (this also includes sorting and grouping). The view-engine internally already supports this but I could not finalize the user interface for the 2.0 version.

This makes it e.g. possible to configure a kind of "Music view" where for each song the artist, album-name and the rating is shown. Another usecase might be images, where showing the image-width and -height as part of each image might be useful.

Finally I'd like to say thanks especially to Frank Reininghaus, who helped a lot to get the new view-engine in shape. Frank told me he probably wants to give some development-updates on Planet KDE in future, but I think I need to create some public pressure by mentioning this here to make it happen ;-)