Usually after a KDE version has been released, it's quite clear for me how Dolphin will look like in a half year for the next release. The time for feature development is quite limited, so there is only a small set of features that can make it into one release.

The best thing of being part of the KDE community is when other KDE developers provide patches for useful features, that I did not have on my Todo-list at all. This happened recently when David Nolden submitted a patch for directory thumbnails. I even did not notice the feature after it had been committed (the code for this is outside the scope of Dolphin). I only got aware about this because David send me a mail, where he asked about the reason of having a wrong alpha blended background for directory thumbnails.

I tried to fix the issue and did some adjustments in the code to have the image folder as background and the images aligned in front of the folders. Well I'm no real artist and two days later another mail was in my inbox. This time from Fredrik Höglund, who provided a patch to improve the look of the directory thumbnails by a nice white border and shadow.

David already wrote about this feature in his weblog and even added a very useful slideshow feature for previews. Feeling somehow guilty that Dolphin got improved by a feature I even did not have on my radar I wanted at least to take care on the remaining issues:

The scaling of the icons in general was not as good as possible. This was especially visible with large icon sizes and has been fixed now: 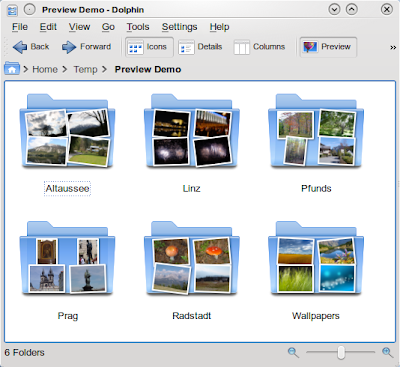 Still it is possible that some people don't like this feature, so I added a configuration to let the user decide which previews should be generated: 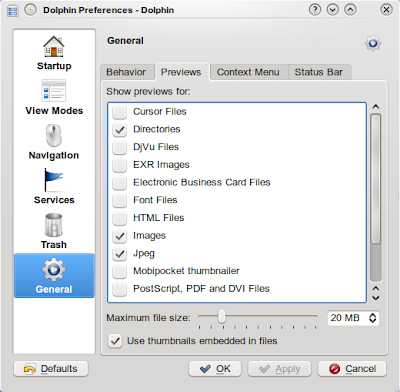 I'll write about the other features that will appear in Dolphin for KDE 4.3 during the next week :-)
Posted by Unknown at 3:16 PM

That looks absolutely awesome!
Much better than the version before.

Awesome as always :) Unfortunately I got swamped by Real Life work so haven't been able to add any of my features this time around :/

Well since this feature is now official... I'd like a cover preview for CD-albums too, like WinXP. I manage my collection and my mp3 reader using dolphin, so it would be very useful.

I didn't check the code to make sure it's not there already, but maybe it would be nice if the pictures to display were chosen randomly but biasing with ranking, i.e. show mostly high ranked pictures

Hate the random rotation. I would prefer a four partially overlapped and equally rotated thumbnails

Thanks for blogging about the affects-nearly-all-users-daily, thus most-important app in KDE.

Isn't hate a rather strong word ;-)

I think it adds a lot of life to an otherwise booring layout. Looks great!

I'm not a KDE user but it looks beautiful.

On my last SVN build, the preview icon was split in 4, even if only 1 or 2 images were available inside the folder.. has this been fixed (using a different layout for 1-2-3+ contained thumbnails)?

Compliments to David and you.. the preview is beautiful and really useful!

What do yo think?

I think you've done a great work guys but (there's always a but) I think the way you choose to implement the previews is a bit old fashioned. Why don't you take a look at the web Bernhard Rode posted above. That way you could preview all the photos (or files) in a folder without even accesing it. That way you can discard rotations, frames and shadows. Just show the photos.
Well, thanks anyway. I just wanted to give you my opinion.

@ Bernhard Rode: I completely agree with you.

I forgot to say that, by doing the previews the way that site does, you can also discard that folder icon in the background of the thumbnails that looks awful.

The caretakers of Dolphin are among the best KDE developers. The practical approach you guys take to adding features is fantastic. It is clear you guys have a development philosophy that is fantastically enabling, not crippling. You can see it in the quality of the feature implementations in Dolphin. Wonderful! Thanks so much for your inspiring work.

P.S. (It really is inspiring - I'm working on a new KDE app because of it).

is svn frozen or something ..i cant seem tp update past rev 951942 and i think these changes were made after that version number

I only say a very big THANK! For your job, and for all KDE devs.

i have been using the "randomly rotating previews" and it is starting to get on my nerves.

I have a folder with a bunch of video files in it and atleast one of the file thumbnail will change its icon when i move the mouse across the folder. I just tested this right now. I just moved the mouse slowly randomly across the folder and random files started changing their images.

I like to anticipate what my computer next with each of my actions. This rotation of images on hovering is having a behavior i cant predict and its anooying.

Now i am almost afraid to hover around my video files because i have no idea what file will change its image and what will not and this is annoying more than anything else.

Dolphin is great and still gets so much better! Great work, thanks a lot!

I would like to see a possibility to sort photos by exif-date. I've seen this in vista and miss it very much, when browsing in folders with photos from different cameras. Is there something like this on the way?