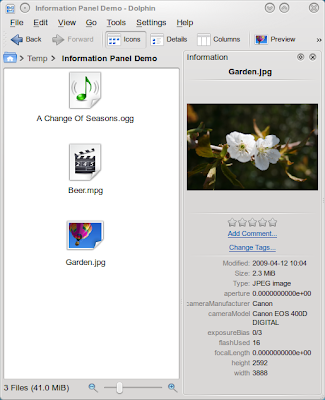 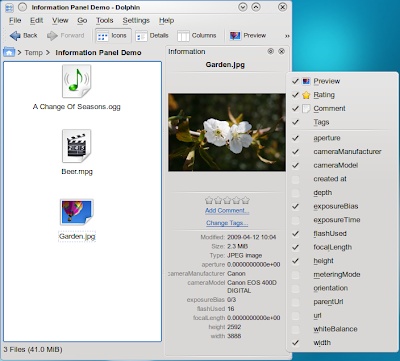 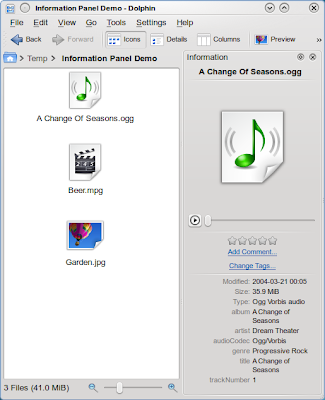 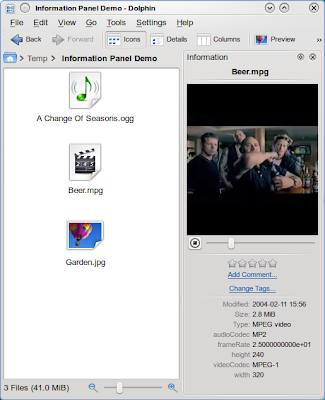 Final remark: Until KDE 4.2 it was possible that Dolphin got blocked for several seconds when reading the meta data of specific files (huge videos, compressed files). The nice thing about using Nepomuk is that no blocking occurs anymore, as the meta data parsing has been done already outside the context of Dolphin.
Posted by Unknown at 9:48 PM

Just a question: will the meta data and previews (except for the play buttons) work for the tooltip as well? Personally I "hate" the information panel.

Great work...i love it. Thanks.

@Quintesse:
> will the meta data and previews
> (except for the play buttons) work
> for the tooltip as well?

The previews work in the tooltip, but the additional meta data is not shown yet :-( This is because the tooltip text is currently retrieved from KDE libs. I'll try to fix it for KDE 4.4 to have the extended information also in the tooltip.

Peter, you rock! Dolphin has become such a wonderful application in the course of the last year, it's simply amazing.

And big kudos also to Sebastian Trueg! I can't wait for further Nepomuk integration in KDE

Well, that (hopefully) needs to be a for sure, otherwise, i, as i18n coordinator, object to a feature that shows texts to the user in a non-translatable way.

Slightly OT, but could you cange the format for float values from scientific to normal ? It might make dolphin look more "professional", but non-geek users will be much happier if things as aperture or framerate are shown the ragular way

Just wondering...now that there's a lot of work going on in improving previews would it be possible to implement this as well:

Treat .desktop files as a special case of text-files. Let me explain the rationale...

I'm a visual person so I keep previews on at all times (and Dolphin is configured to use the "common view for all folders"). However, when preview is on the desktop-files are previewed as text-files.

That's logical considering that they are textfiles, but I'd very much prefer if they would still be rendered with the icon (if any) specified in the file. The "render as text-file" is especially jarring if you try to use the applications:/ kio-slave.

I'd just like to say thankyou for some amazing work that impacts my computer usage 100 times a day at least.

When I first heard about Dolphin, I admit that I was one of those people who goes "gah! Konquerer works just fine! And I *like* browsing files and websites with the one app!". You never know what you're missing until you try something better though, and Dolphin was definitely that "something better" in my case. The breadcrumb, places, infobar, large previews, one click splitting of the viewport and now all this!

Who would have thought you could make a file manager sexy? ;-)

PS I do have to concur with the post above... Icons for .desktop files would be the icing on the cake!

An idea - how about implementing a quick preview audio/video play button in a similar fashion to the current 'add to selection' button? I reckon it'd be much easier to access there, and it's sort of consistent in placement with the visual thumbnail for pictures.
A video preview for the thumbnail activated in the same manner would be awesome as well, but I don't know if that's possible.

What about reimplementing the integration with the"previewer" plasmoid? It was really sweet for a keyboard lover like me to be albe to have a preview of almost any file without having to leave Dolphin even for a second.

It was there in KDE 4.2 beta1 if i recall correctly, and then it disappeared.
Still, the app is awesome as it is, you can truly be proud of your work.

Cool feature. This is perhabs besides the integrated search the main reason to use nepomuk. Now dolphin is well integrated in that thing.

What I am Interested in is changing meta-data of mp3-files in dolphin. Will that be possible?

Thumbs up for the collaboration between Nepomuk and Dolphin. :-)

I guess all these meta attributes will be rendered in a human readable way (not camelcase!?) in the release version? :-)

Great, that dolphin won't block any more on directories with a lot of video or image files! thanks a lot for the continouos improvements and optimizations of dolphin!!

Great,I was seraching for these stuffs for a long time...Thank u...V muchh

Thanks for developing dolphin it's a great file manager.
One thing I am missing though: when I navigate through large directory structures it would be perfect by going one directory up again the cursor would jump to that directory name where I was in before.
At the moment I have to jump one directoy up and scroll down to enter the next directory.

Is there an other official place to put such feature request?

Stupid question: how on earth do I activate that? I use KDE 4.3 RC and still dolphin doesn't seem to be able to display all that information in its sidebar. Nepomuk is activated.